As you may know I write a small OS X called Sail. Over the past few months that it has been available I've received a few crash reports about an issue I wasn't able to reproduce. Today I decided I wanted to dive into them and see if I could at least figure out the root of the issue and fix it with my next release.

This lead me down the rabbit hole of symbolication, something I personally hadn't dealt with myself before (since Crashlytics does it for you). I was hoping I would be able to find something around the internet about this, unfortunately what I mostly came up with was a lot of iOS related answers that didn't seem to work the same way and two links to Apple documentation that have been removed. Other than the process for symbolicating reports for OS X apps seems to be different than iOS apps which there is plenty of documentation for (I'm not bitter). Daniel Jalkut has a post about these but his exact method didn't seem to work for me.

Here is what did work for me. For my first abridged crash report I had this

Just glancing at this crash report it's not too difficult to understand a bit about what was going on. A notification was sent, some methods were called in my application and then accountTypeWithAccountTypeIdentifier was called. Based on the small number of times I call that method I was quickly able to assume where the issue was but I still wanted to see exactly what methods of mine were being called first.

This brings me to atos the command line tool Apple provides to symbolicate these reports. This is where my experience differs with most of what I found online. My usage looked like this:

This uses my dSYM file that was generated with the archive build I submitted to the app store along with the knowledge that it was running on an x86_64 architecture and the most important part, for me, the load address.

To find my dSYM file that was generated when I did my archive build I simply noted the version and build number from the crash report, went to the Archives tab in the Xcode organizer, found the build with the same number, right clicked and clicked "Show in Finder." This takes you directly to the .xcarchive file on disk which you can right click and click "Show Package Contents." From there I copied my dSYM to the desktop so I didn't overwrite anything unintentionally.

The load address is the starting memory address of your application. The tool uses this address as an offset to find the correct methods in your symbols. In the above crash report Load Address is a provided field. This was the only report I saw that had that, typically I needed to look under the Binary Images section for the address range of my application. In this example it was 0x106823000 - 0x106896fff.

The atos command then provides an interactive prompt where you can paste addresses into the stdin and it will tell you the corresponding methods. Mine looked like this:

Here I can see that the notification that was being posted was probably an NSApplicationDidFinishLaunchingNotification starting off some methods in my app delegate. I then load the accounts preferences, which would make sense to call the ACAccountStore method, but then dealloc is called. Seeing this was an immediate red flag since KSAccountsPreferences should be retained since it provides information about available accounts to the rest of the application.

I had another crash report from a different issue that was a little bit harder to parse without symbolicating the methods.

Obviously this was caused by an invalid access to an array but that's a little harder to track down. So I again used atos with the dSYM and new memory location.

I got this output for my memory addresses

This ended up giving me the exact line where out of bounds issue was happening depending on a certain number of accounts. I noticed that this issue had been fixed since my last release so I did a diff on the tag I created for that specific release with

Then in Kaleidoscope I was able to figure out what changed had fixed the issue. Just because it's so pretty here is what it looked like. 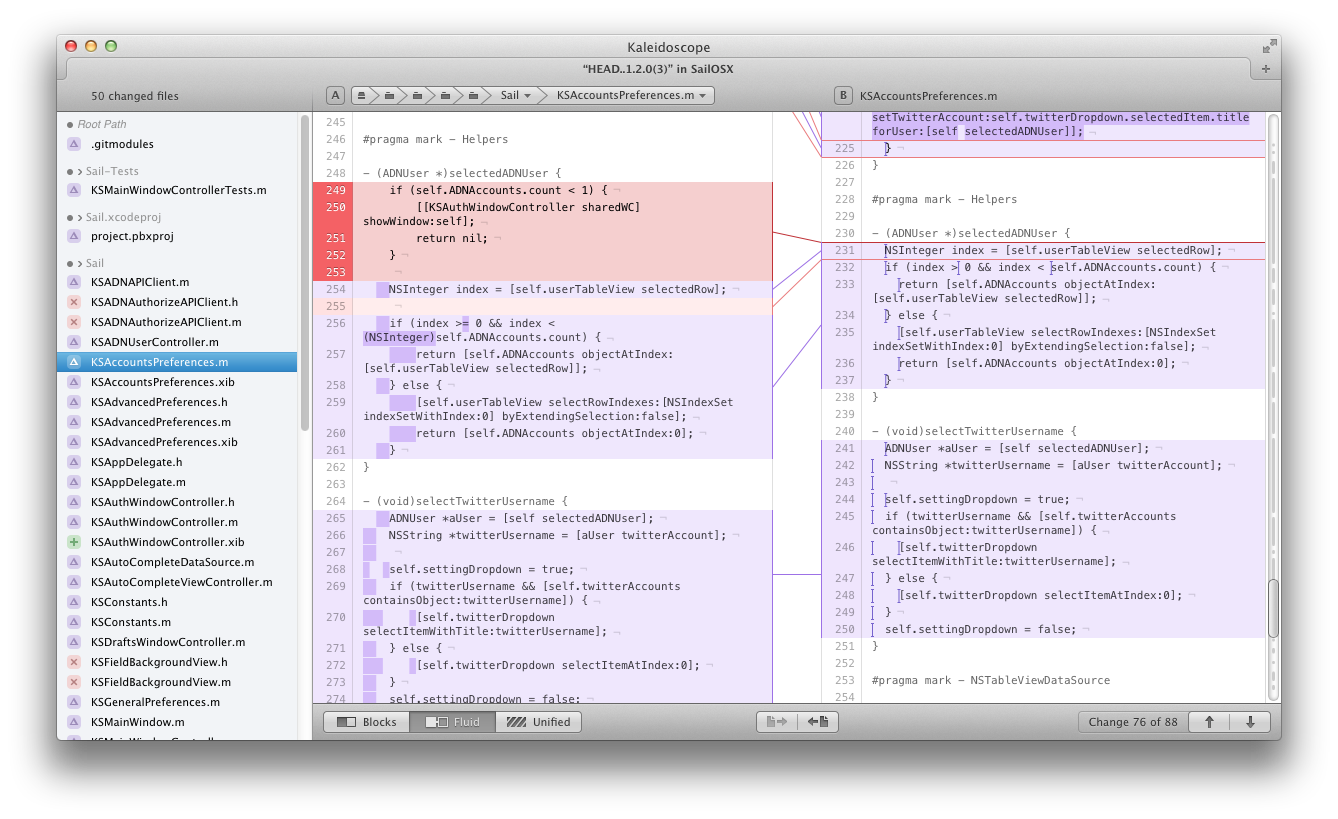 Symbolicating crash reports is definitely vital to tracking down bugs your users are experiencing when you can't reproduce them yourself. Once you figure out how it's obviously worth it.